We presented a tutorial to the Society for fNIRS educational webinar series on April 12, 2021 on using Homer and AtlasViewer to analyze high density fNIRS measurements of brain activity evoked by a finger tapping task. A video of that webinar can be viewed here. Here, we provide some additional documentation so that others can reproduce the results presented in webinar.

The data we use for this demonstration was acquired with a NIRx NIRSport2. We designed a high-density hexagonal arrangement of 7 sources and 16 detectors as shown in the figure above. This provided for overlapping measurements with a short separation of 18 mm and a long separation measurement of 30 mm. Data was collected for a run of 5 minutes. The subject tapped their fingers for 10 seconds, repeating every 30 seconds such that 9 trials of finger tapping happened during the 5-minute run. The run was repeated 3 times. The data and the probe geometry file can be downloaded from here. 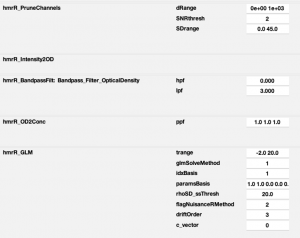 The group results with and without the short separation regression are shown in the figure below.